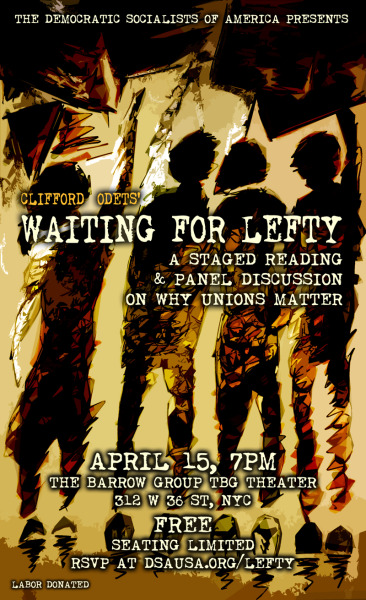 Presented by the NYC Democratic Socialists of America 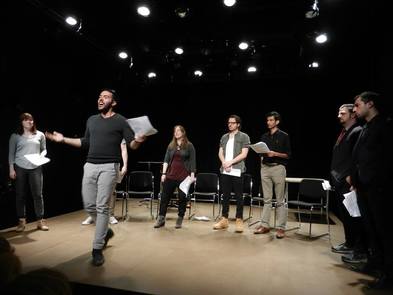 Arthur Cheliotes is President of Local 1180, Communications Workers of America AFL-CIO. Local 1180 is the first public worker and one of the largest locals in the Communications Workers of America. The Local represents middle & high level administrative and supervisory employees in New York City Mayoral agencies, the Health and Hospital Corporation, and the State Court System. Local 1180 is now organizing workers in the non-profit sector and represents workers at Planned Parenthood, Human Rights First, The Nation Magazine, ASPCA, Democracy Now and Human Rights Watch. Under Cheliotes, the union is recognized as a leader on public policy issues, particularly working for equity in the city tax structure so that public services are maintained through a progressive system of taxation that takes the burden off working families struggling to stay in the middle class.

Mary Robinson has directed over 60 productions of both classics and new plays at theatres around the country, including Seattle Repertory Theatre, Actors’ Theatre of Louisville, South Coast Repertory, Hartford Stage (where she was Associate Artistic Director for five years), and at New York’s Second Stage, Manhattan Theatre Club, Young Playwrights’ Festival, and Theatre for a New Audience. Her production of Barbara Lebow’s A Shayna Maidel ran for 15 months Off Broadway, and she received a Drama Desk nomination for her direction of Lanford Wilson’s Lemon Sky. In 1987, she was the first recipient of the Alan Schneider Award, and from 1990-95 she was Artistic Director of the Philadelphia Drama Guild.  For fifteen years, she was on the board of directors of the Stage Directors and Choreographers Society, an independent national labor union. She is the author of Directing Plays, Directing People: A Collaborative Art, and she teaches in the MFA Directing program at Brooklyn College.

Maria Svart is the national director of the Democratic Socialists of America (DSA) and a former co-chair of the Young Democratic Socialists (YDS). Before coming on staff at DSA in 2011, she was a campus activist involved in feminist, labor solidarity, environmental and immigrant rights work at the University of Chicago, and then union organizer with the Service Employees International Union for eight years.